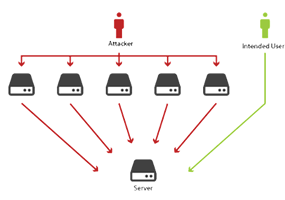 The assailants performing the DoS attacks, generally target sites or services hosted on crucial web -servers such as; banks, payment gateways, security intelligence, etc. An explicit attempt by the attackers that may prevent the legitimate users from accessing the resources may include: Flooding a Network with multiple requests. Thus, preventing the legitimate traffic. Disrupting the Secure Connection between the source and target machines. Prohibiting a Particular Individual from gaining access to a service. Disrupting the Functionality of the complete system.

Illegal Consumption of the Network Resources

The lifeline of the network resources includes network bandwidth, memory and disk space, CPU time, etc. The DoS attackers or network attacks, target these resources and prevent the intended users from accessing them. For example, in "SYN flood" network attack, the intruder tries to create a connection with the victim's machine and over consumes the kernel data structures which are a crucial resource for establishing network connections. The intruders may also consume the bandwidth of your network. This is generally done by generating a large number of data packets transferred towards your network.

In addition to network bandwidth, the DoS attackers may also consume many other crucial resources. Some of the systems have a very limited number of data structures available that are meant for holding information. The attackers may generate a certain type of script of code that has the caliber of creating duplicate copies of all the data stored in a data structure. Thus, destroying the available space.

The place that the intruders love to target is the user's machine. Any sort of alteration in the machine's configuration may disturb the whole functionality. The most common job that the attackers perform in this type of case is, altering the routing information of the routers. The attackers may also target the registry of the Windows NT machine.

One of the most basic issues that needs to be focused and properly cared about is, the physical security of the devices. Proper measures and all the possible precautions must be taken to ensure the safety of computers or devices. These physical artifacts include computers, routers, network wiring chords, etc. The local or international law enforcement agencies prove to be very helpful in this scenario. This type of Denial of Service attack or network attack often leads to heavy loss of capital and other resources.